Delivering a simple backup and recovery solution for remote, branch, and small offices can resemble taming the Wild West. Applications, operating systems, IT skill sets, and network configurations can all vary widely in these environments. Further, the small footprints and distance to these offices make managed service providers (MSPs) reticent to support them.

These challenges created an opportunity that StorageCraft seeks to address with its OneXafe Solo. The OneXafe Solo offers a simple, centralized setup and configuration of backups and recoveries in these size offices. Adding to its appeal, one can set up a OneXafe Solo without needing to send IT staff to remote offices.

As I uncovered in my review of the OneXafe Solo, it delivers on these objectives. To achieve them, one should first document the environment and create checklists before a Solo arrives. These steps will ensure a seamless and successful configuration and deployment.

To make this test as real-world as possible, I opted to deploy a OneXafe Solo in a remote DCIG office.

The intent was for the analyst in the remote DCIG office to play the role of a disinterested user. This analyst would unpackage the OneXafe Solo, power it on, connect it to the network, and theoretically be done. I would then configure the Solo from my office and manage the remote office’s backups and recoveries.

I ordered the OneXafe Solo and instructed StorageCraft to ship it to the remote DCIG office. It took five (5) business days for the Solo to arrive, shipping three days after placing the order and arriving two days after that.

The OneXafe Solo offers both wired and wireless network connectivity. Solo only intends the use of its wireless option for the initial setup. During normal data protection operations, one should use its wired connection.

Having plugged in the Ethernet and power cables, the analyst encountered a minor issue: the OneXafe Solo initially did not power on automatically. After re-reading the setup instructions and more carefully inspecting the OneXafe Solo, he discovered a power button on the front. He pressed it, and the OneXafe Solo powered on as expected.

At that point, the OneXafe Solo was ready for discovery and configuration.

Discovering and Claiming the OneXafe Solo

One discovers and manages all OneXafe Solos through StorageCraft’s Cloud Public OneSystem. This represents one of its most appealing features. After a OneXafe Solo connects to a network, it immediately checks in with OneSystem. One may then centrally claim and manage it via a web browser.

I logged into OneSystem using previously created credentials and created DCIG as my default site. I selected the Service Nodes option from the Configuration menu to discover and claim the OneXafe Solo. Using this option, I claimed the OneXafe Solo. However, most users will see the appliance show up automatically ready to activate.

This operation worked flawlessly. I entered a claim code from an email StorageCraft sent to me. Once entered, the OneXafe Solo appeared as an option. I then claimed it and assigned it to the DCIG site. 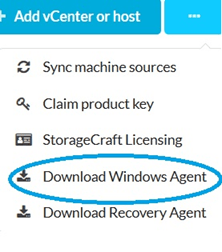 The remote office only had one Windows 10 PC to backup. Since it was a physical PC, it did require the installation of StorageCraft’s backup agent on the PC. This step necessitated the involvement of the analyst at the remote site.

Through the OneSystem interface, I located the Download Windows Agent option on the Configuration menu. This option provided me with a link on StorageCraft’s website. The other analyst used this link to download and install the Windows agent. It took him through a wizard-like install with it requiring a reboot of the PC to complete the install.

The agent installed, I returned to OneSystem to generate an Agent Registration Token. I shared this token and DCIG’s Site ID. The other analyst entered them into the StorageCraft agent, which allowed his PC to register with the OneXafe Solo.

Next Up, Cloud Storage

Using OneXafe Solo, one may store backups locally, in the StorageCraft Cloud, or use a disk-to-disk-to-cloud (D2D2C) backup methodology. To use the StorageCraft cloud, I had to configure it in the Cloud Services section of StorageCraft’s MSP portal. This went smoothly.

After creating my cloud account, the system prompted me to create Alerts. I only created two alerts – Machine Added and Large Growth – that would email me these alerts.

I then used the OneSystem portal to finish configuring the cloud storage on the OneXafe Solo. After entering my cloud credentials and a password, the StorageCraft cloud appeared as a backup target.

I explored using the StorageCraft cloud as the primary backup target. However, the WinMTR network traceroute diagnostic tool revealed fluctuating Internet throughput and speeds. To improve performance, I introduced local storage into the remote office.

The analyst connected another PC he owned to his network using a wired Ethernet connection. He shared a folder on that PC, which the OneXafe Solo discovered as an SMB file share.

I then used OneSystem to create a backup policy with this SMB file share as the storage target. I also configured the policy to create an initial full backup and then take snapshots every four hours. It would also daily replicate data to the StorageCraft cloud for offsite data protection.

To configure the first backup, I accessed OneSystem’s Protection tab and checked the box next to the PC to back it up. I then assigned the LocalBackup policy to that PC and started the backup. The StorageCraft agent took a snapshot of the PC that took about three minutes to complete. The snapshot captured all the PC’s volumes amounting to over 800GB of data.

The agent transferred data from the PC to the local storage target. Since the source PC only had a 100Mb network card, we only achieved a throughput of 9-10MB/sec. This throughput stayed relatively constant for the entirety of the backup, which completed in about 28 hours.

The first replication job kicked off exactly 24 hours after the first full backup completed. I let this job run for about 12 hours before I canceled it. While it ran without issue, it was only achieving 1MB/sec of throughput. Under normal conditions, I would use the Solo’s cloud seeding option to move the 800GB to the StorageCraft Cloud. Using the seeding feature, I would copy data to a disk and then send it to StorageCraft to seed its cloud.

After a few days passed and numerous backups completed, I completed the testing by recovering a file. The Recovery screen took me through a wizard-like experience. I chose the machine to recover and the backup to use as the recovery source. After making the selection, OneSystem loaded the volumes and files to recover.

OneSystem unexpectedly presented me with multiple volumes to choose for recovery. After contacting StorageCraft support, it informed me StorageCraft protects hidden and visible volumes.

Armed with that knowledge, I focused on the larger volumes (20GB+) as the sources for recovery. After exploring volumes 12 and 13, I located the file on volume 12 and selected it for recovery. I was prompted to download the file as a zip file, which I then sent to the other analyst who successfully unzipped and restored it.

The analyst’s office only had a physical environment which limited me to performing physical recoveries.  However, the OneXafe Solo supports virtual recoveries, which many organizations may find more appropriate for their remote offices.

To test this functionality, StorageCraft provided me with access to one of its labs. The recovery process works much the same as a physical recovery though it differs in two ways.

First, we recovered an entire VM image. To do so, we selected the VM backup to recover and the Microsoft Hyper-V host to which to recover it. We then created a name to use for the recovered VM. We opted to use StorageCraft’s VirtualBoot feature. This allows the VM to boot from the target storage device before it restores all the VM’s data.

Second, we also checked the “Migrate data” and “Power on new VM after restore” boxes. This would move all the VM’s data from the backup target to the new host. The boot process would also start as soon as StorageCraft had copied over the VM’s driver files.

Using VirtualRecovery to perform the restore helps in two ways. It gave me the option to restore the entire machine on the same or a different VM host. It also presented me with a more familiar interface to navigate to recover individual files or folders.

During the time I tested the OneXafe Solo, I encountered almost no issues with either its hardware or software. The few I encountered were either the result of me failing to fully follow directions or were minor. For example, the other analyst figured out he needed to press the power button to turn on the Solo.

That said, I knew protecting remote offices represented the “wild west” of backup and should have accounted for certain variables. For example, I could have:

After performing these and other preparatory tasks, the Solo successfully performed backups and recoveries in the remote office.

My experience should both encourage and inform anyone looking to use the StorageCraft OneXafe Solo for remote office backups and recoveries. The OneXafe Solo delivers simple, easy, centralized backup to almost any remote office that has internet connectivity.

To ensure seamless setup, follow the first rule of every IT deployment: document each remote office’s environment and backup requirements. Follow that advice, and you can expect straightforward, painless, and comprehensive backups for your remote and branch offices with minimal time, effort, or personnel.

The DCIG Product Review is a product of DCIG, LLC. All other brands or products are trademarks or registered trademarks of their respective holders and should be treated as such. Product information was compiled from both publicly-available and vendor-provided resources. While DCIG has attempted to verify that product information is correct and complete, feature support can change and is subject to interpretation. All features represent the opinion of DCIG. No negative inferences should be drawn against any product or vendor not included in this article. DCIG cannot be held responsible for any errors that may appear. This article was commissioned by StorageCraft Technology Corporation.