What Is R0 and Why Is It Important?

R0 or R0 is pronounced “R naught.” It’s a mathematical term that indicates how many people will be infected from a single person who has a disease.

The H1N1 Spanish Flu actually came back came back in 2009 but researchers reported in the journal Science that during its return the R0 value was between 1.4 and 1.6. The existence of vaccines and antiviral drugs made the 2009 outbreak much less deadly.

According to the World Health Organization (WHO), a total of 8,098 people worldwide became sick with SARS and 774 died. By late July 2003, no new cases were being reported, and WHO declared the global outbreak to be over.

So, is this the end of time as we know it or is COVID-19 being blown out of proportion by the media? Italy has seen 41,000 cases, 3,400 deaths and 4,400 recoveries. The United States has seen 12,000 cases, 176 deaths and 108 recoveries. What’s the difference? Some pundits are saying socialized versus private medicine while others are saying that Italy’s hardest-hit regions were full of older people with underlying conditions.

The US CDC concurs that older adults and those with heart disease, diabetes or lung disease are much more prone to suffer from the disease. Unfortunately, there is not much more that is known at this time and until we do know, perhaps the safest course is to try not to catch it until we do know. And that means following the authorities when they tell you to socially isolate yourself.

As my ex-father in law used so say, “if you cannot be safe, be hygienic.” For first responders, it’s hard to isolate yourself against the virus since you are out and about every day. But you can be hygienic. If your CO has no objections, hang a bottle of hand sanitizer from a belt loop or your vest. Use it and use it frequently. Wash your hands with soap and water every time you get the chance. Remove your uniform and wash your hands and face as soon as you can after getting home. Even better, take a shower as soon as you’re home.

Remember that WW II phrase, “We Can Do It!” We still can.

Snohomish, Wash. – Cyemptive Technologies, a provider of pre-emptive cybersecurity products and technology and winner of the Department of Homeland Security’s...

October 28, 2020 – How to Plan and Execute Effective Business Continuity Trainings and Tabletop Exercises

Ron LaPedis, a Distinguished Fellow of the Ponemon Institute, has more than 25 years of business continuity and information security experience as an implementer and trainer. Ron also has extensive training and experience in emergency response and active shooter training and is a first responder and member of his community’s city council preparedness committee. Ron holds several certifications including FBCI, MBCP, CISSP-ISSAP and ISSMP.

Often times, business owners lose sight of the importance of being prepared for unexpected disasters, especially when it comes to...
READ MORE

Proof that Being Prepared is Worth It

Written by: Vicki Thomas Typically when it comes to reading and watching news coverage of natural threats such as hurricanes...
READ MORE

The Best Defense for Ransomware is an Even Stronger Offense

Tips Every Organization Must Follow to Protect Business Continuity Ransomware is not new. In fact, forms of ransomware have been...
READ MORE 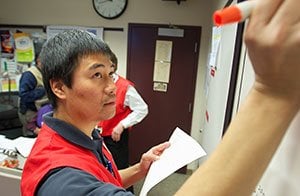 Changing the Course for EOCs: Translating Knowledge into Action

Albert Einstein said, “Information is not knowledge.” It should come as no great shock that Einstein’s wisdom has multiple applications....
READ MORE