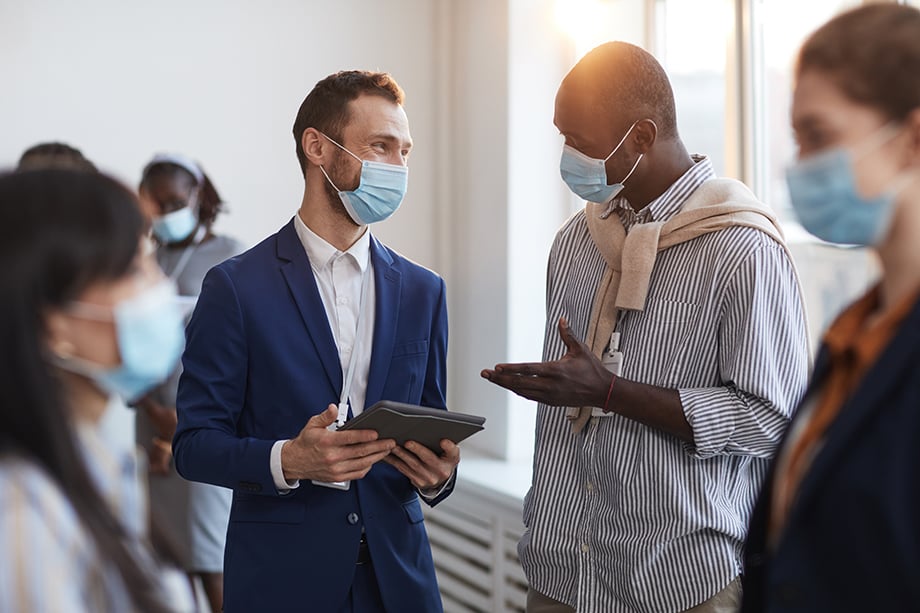 The State of Business Continuity Preparedness 2021

Forrester Research and Disaster Recovery Journal have partnered to field a number of market studies on business continuity (BC) and disaster recovery (DR) trends in order to gather data for company comparison and benchmarking, to guide research, and for the publication of best practices and recommendations. This study, which focuses on BC maturity and preparedness, was first fielded in 2008 and then again in 2011, 2014, and 2018. That first study provided us with a baseline for BC preparedness we can now compare to all the subsequent studies to see how BC maturity and preparedness are trending across time. These trends are more important than ever as 2020 was the year to be resilient and 2021 looks to follow in the same vein. Specifically, we designed this study to determine:

No matter how organizations felt about their BC maturity going into the COVID-19 pandemic, BC plans fell short for most. In a recent survey, only 23% of purchase influencers felt very confident that their organization’s business continuity plan will meet their needs during COVID-19.* In this survey, we also found that: 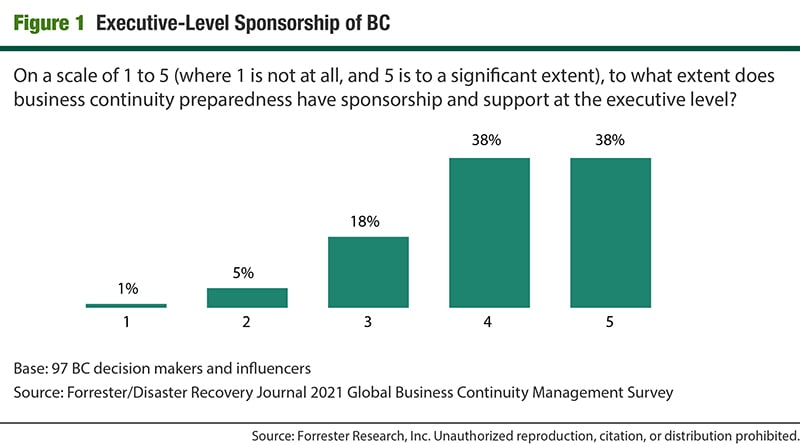 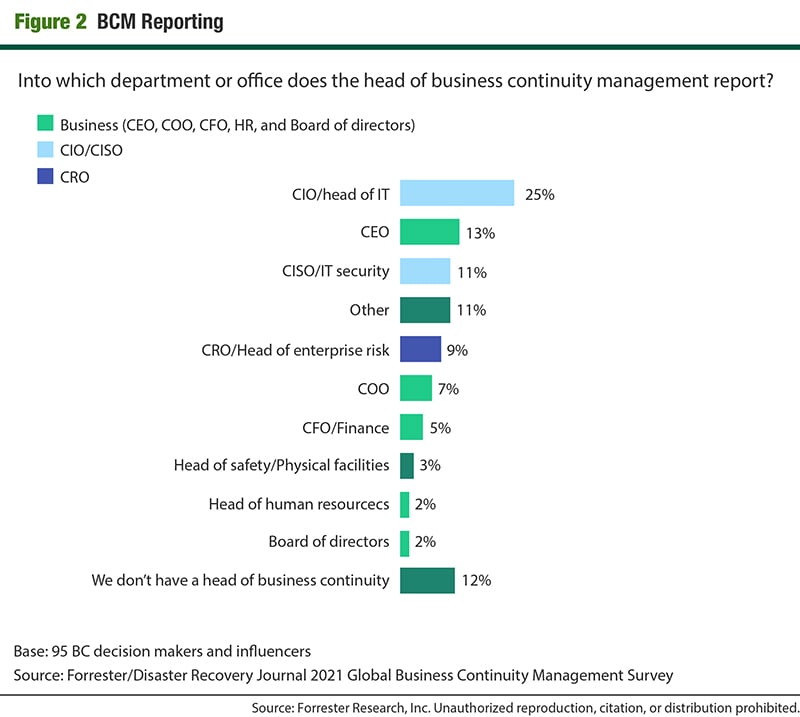 BCM Program Funding Will Increase for A Majority of Firms

There is good news when it comes to BC budgets, the majority of firms expect an increase in funding in the next 12 months while the number of full-time equivalents dedicated to BCM has held steady. More specifically, Forrester found that: 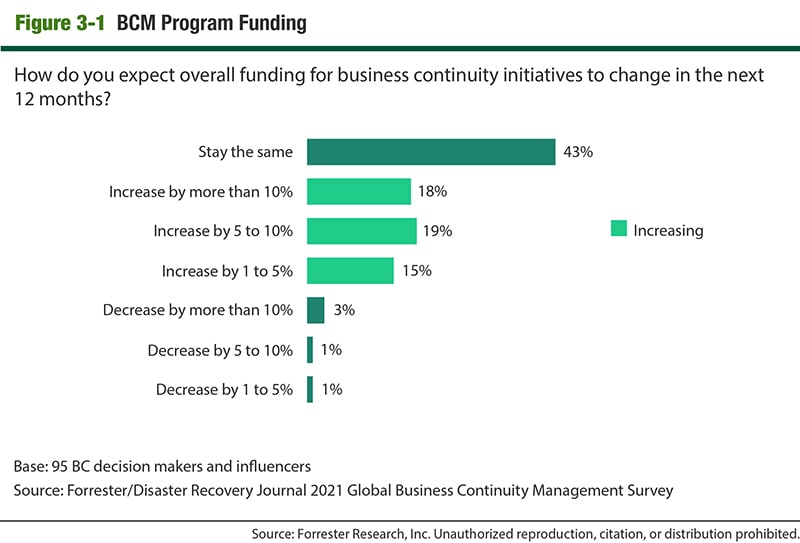 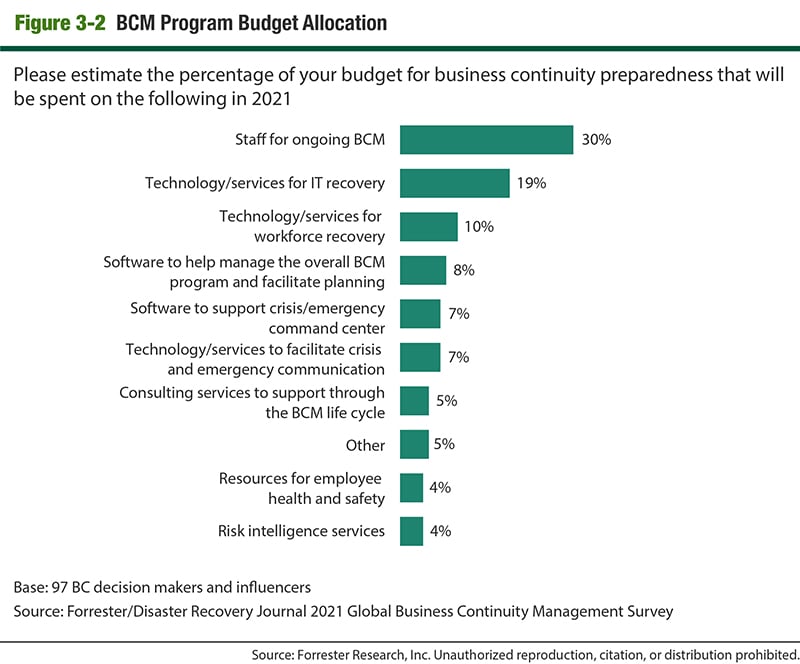 Our study found the vast majority of companies conduct a BIA and risk assessment in advance of BCP strategy development and plan documentation. More specifically, Forrester’s survey found that: 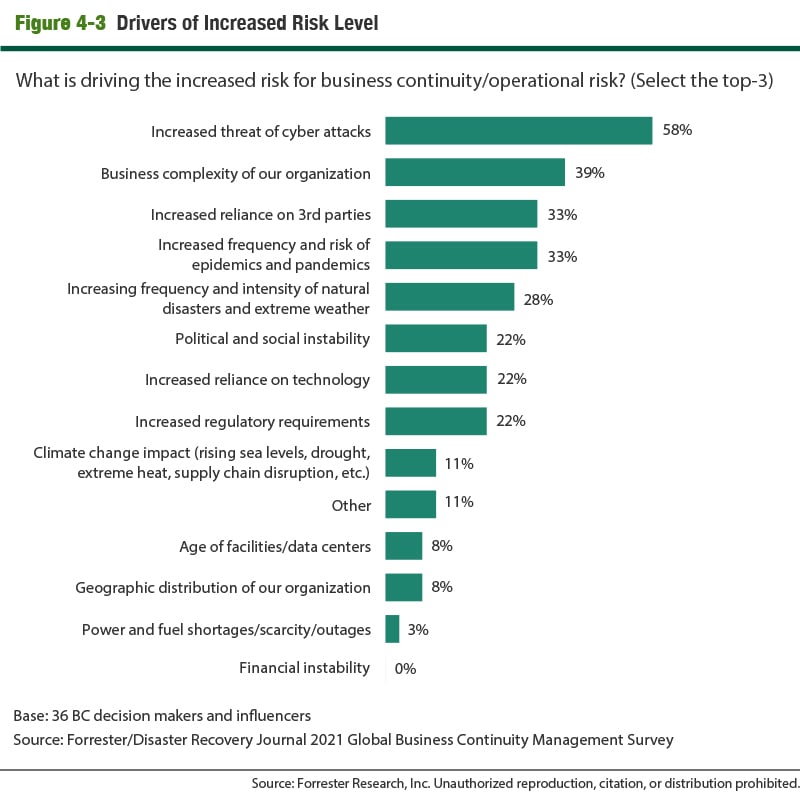 Organizations Prefer a Mix of Scenario- And Impact-based BCPs

As of a 2014 study, the percentage of organizations with documented BCPs jumped to 93% and held steady. If you don’t have documented BCPs, your BCM program is clearly in a dire condition. Most firms weren’t ready for COVID-19, thinking the risk of a pandemic too remote to consider in their planning. But by failing to prepare, these firms were not preparing to succeed. Forrester found in this survey that: 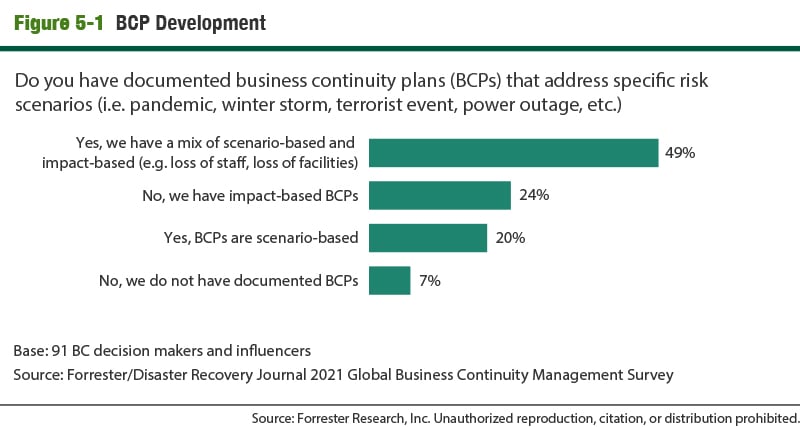 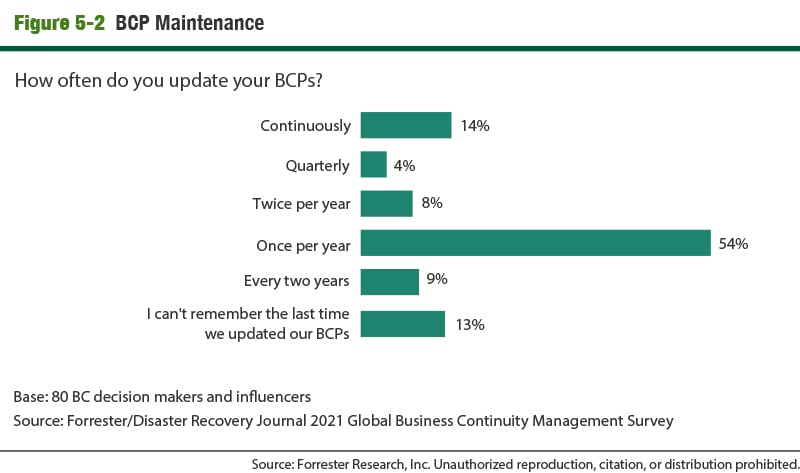 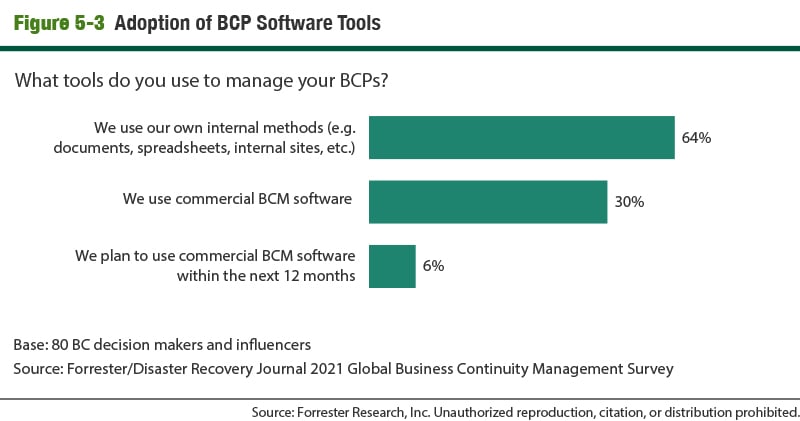 We’ve said this every year, but it bears repeating; if you’re not testing your BCPs, you simply aren’t prepared—not to mention you’ve wasted significant efforts on BIAs, risk assessments, and plans that you will most likely be unable to execute. Despite years of urging from industry experts and consultants, testing remains a major area for improvement across organizations of all sizes and industries. More specifically Forrester found that: 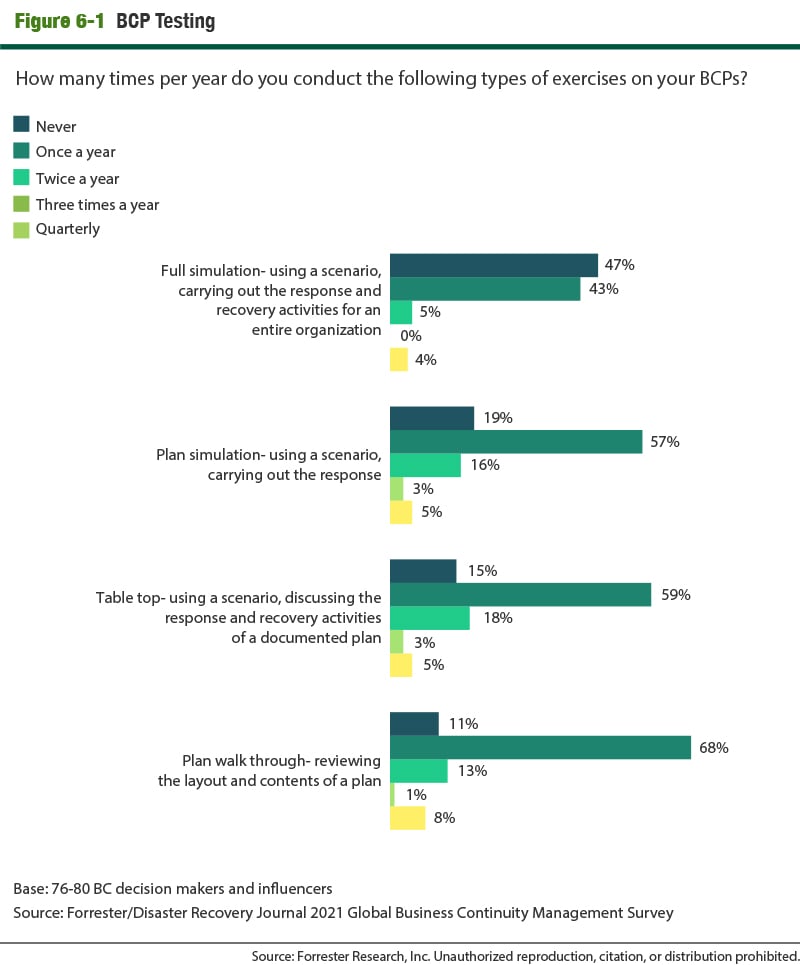 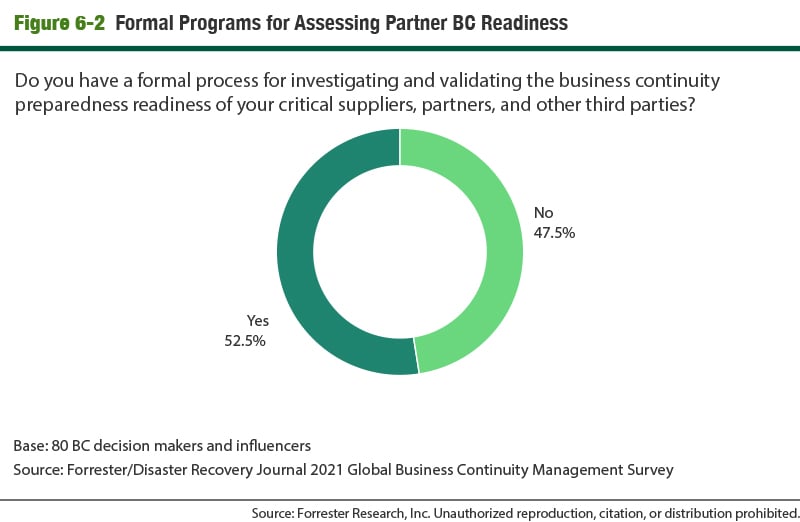 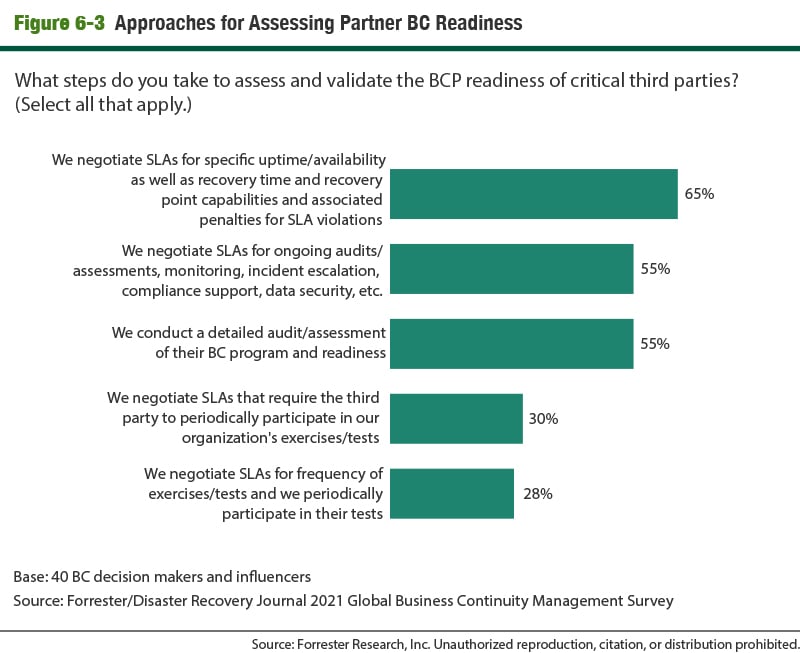 For a BCM program to truly be successful not only do you need executive-level support, but you need the line of business owners and employees involved in the entire BCM lifecycle. Unfortunately, their involvement remains limited. Business owners are more likely to be involved in the BIA: 38% of respondents report business owners are very involved – a significant decrease from 2018 (44%) but a significant increase from 2014 (28%) (see Figure 7). However, other areas such as plan development and maintenance, awareness and training, and especially risk assessments need much more business involvement. 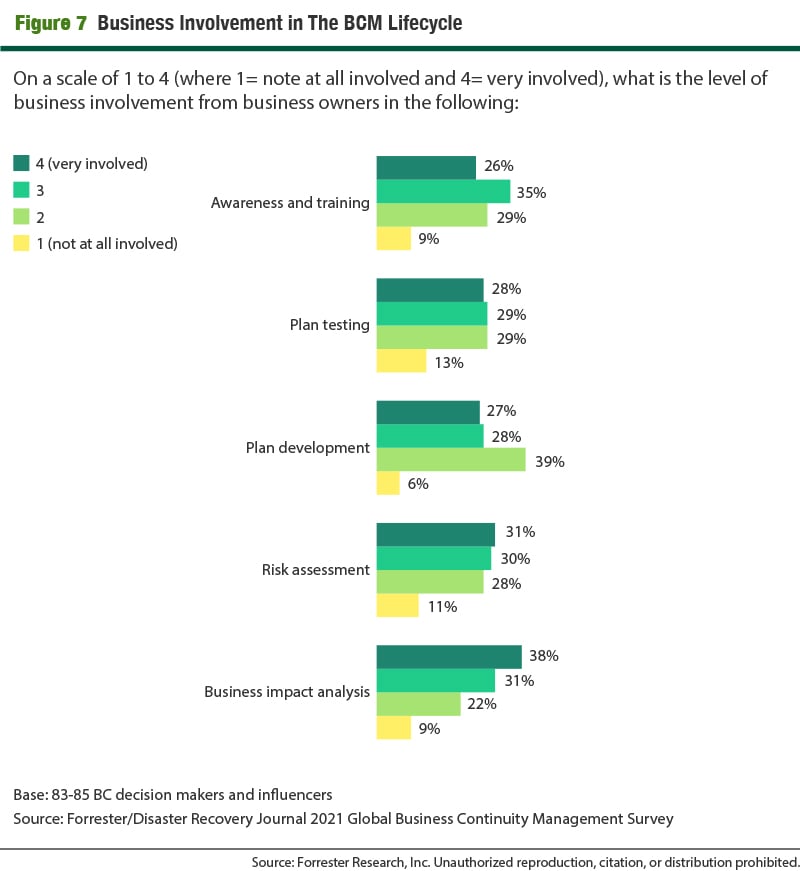 Companies Use a Mix of Strategies for Workforce Communication

Organizations often go to extraordinary lengths to develop BC and DR plans which address power outages or the failover of IT systems to alternate sites but often neglect or underestimate the human aspects such as workforce crisis or emergency communication. In this survey, Forrester found that mobile phones have changed communication for a vast number of firms (see Figure 8). With mobile phones, organizations can try to reach employees by calling, emailing, texting, or even sending a mobile alert through a dedicated app. Email came in a close second with 88% of respondents using it for crisis or emergency communications. We also found that using an automated software is the norm with 45% reporting. They have already adopted this software and another 16% planning to adopt in the next 12 months. 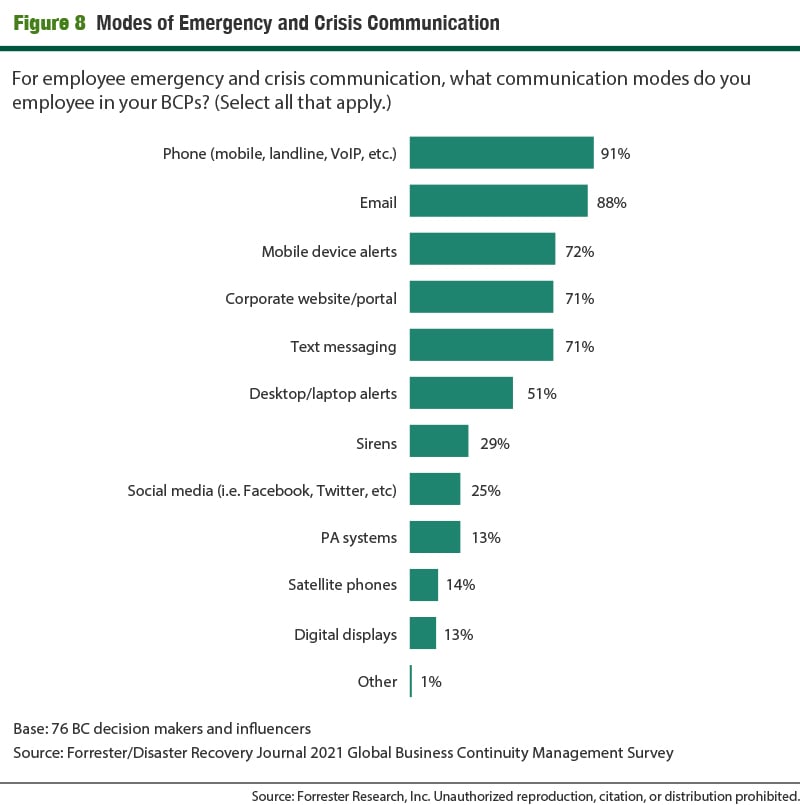 Invocations Are Frequent; Training Is Key to Successful Invocations 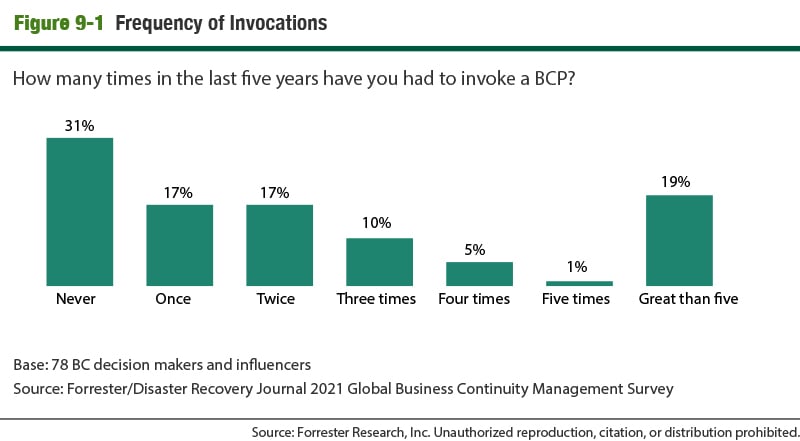 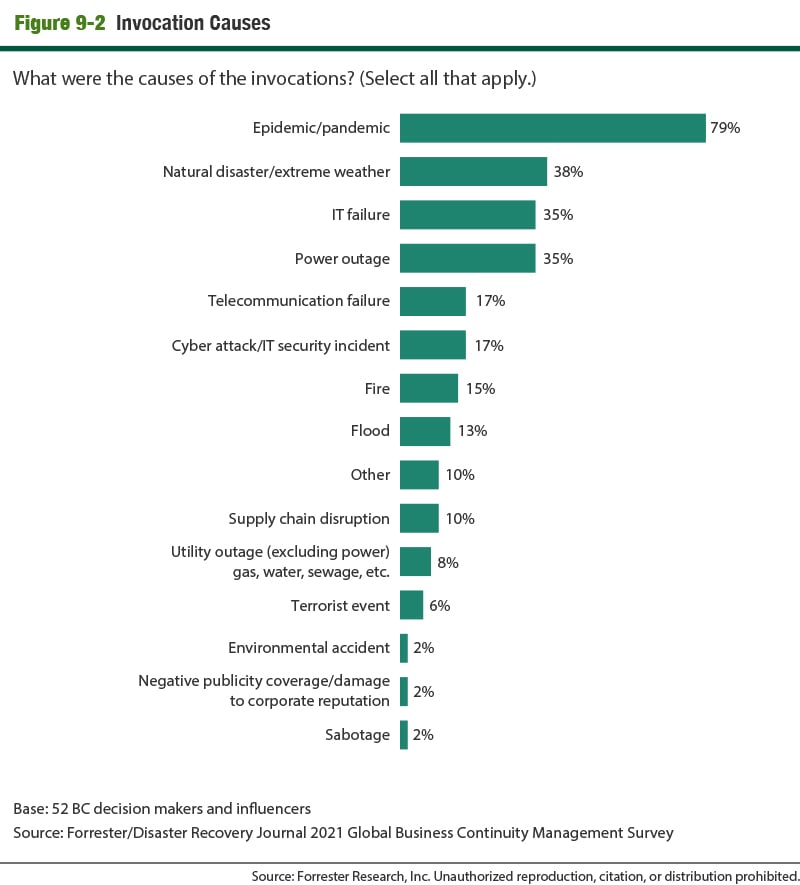 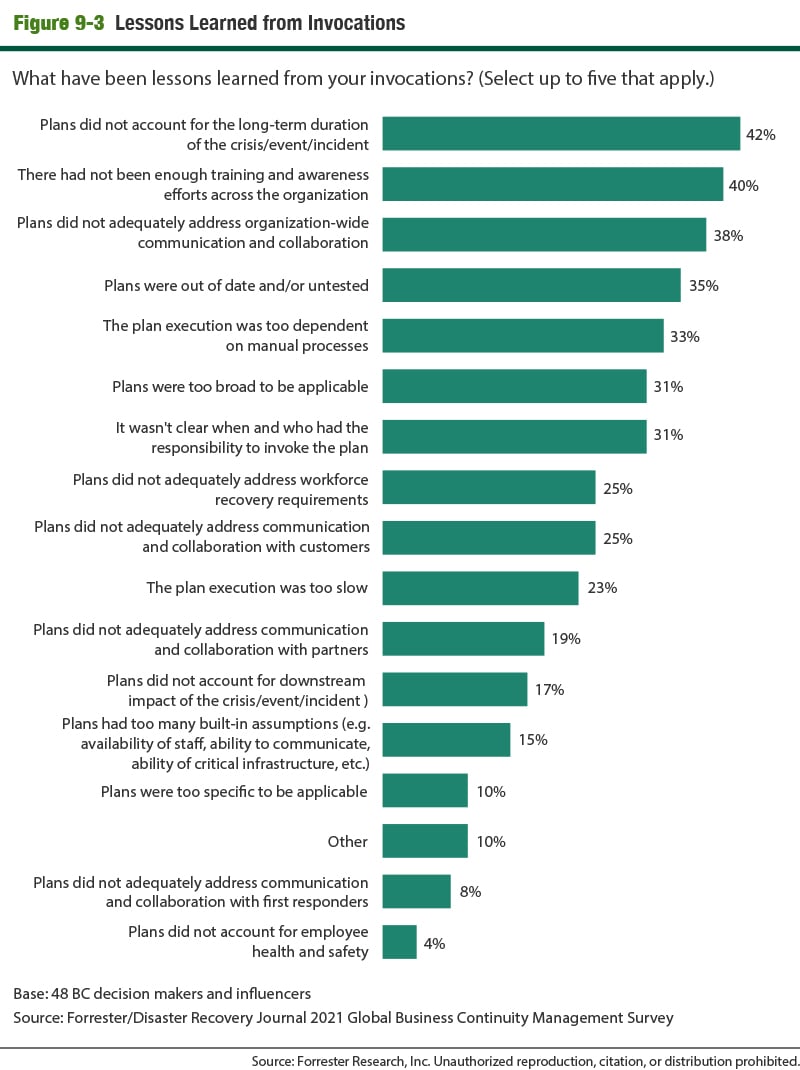 In the months of October, November, and December 2020, Forrester Research and Disaster Recovery Journal (DRJ) conducted an online survey of 97 business continuity decision-makers and influencers. In this survey:

This survey used a self-selected group of respondents (predominantly DRJ members and Forrester clients) and is therefore not random. These respondents are more sophisticated than the average. They read and participate in business continuity and disaster recovery publications, online discussions, etc. They have above-average knowledge of best practices and technology in BC/DR. While nonrandom, the survey is still a valuable tool in understanding where advanced users are today and where the industry is headed.

Amy DeMartine is the research director of security and risk for Forrester Research.

Acquisition will accelerate Okta’s journey to provide identity for the internet, bringing choice and flexibility to both developers and the... 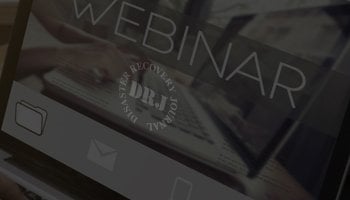 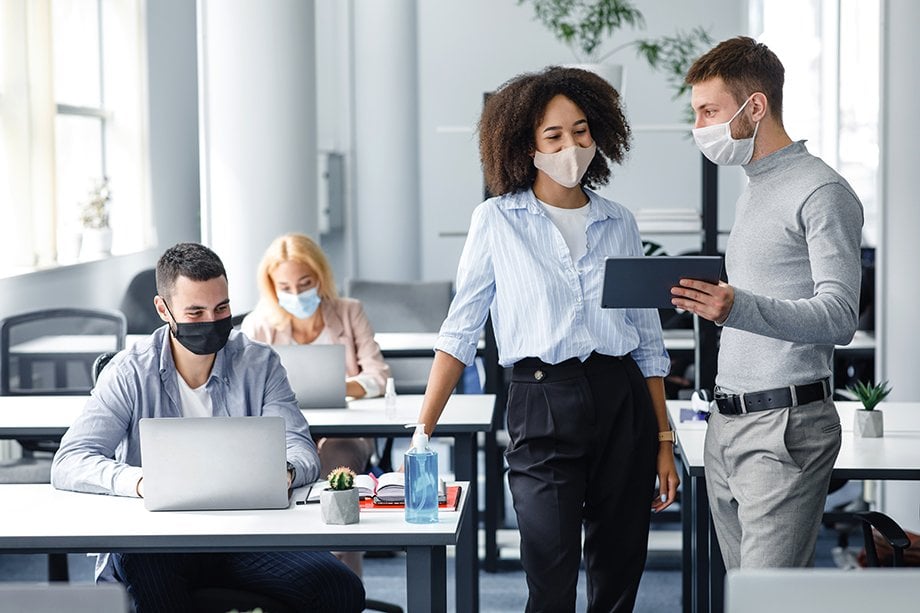 In Business Continuity, One Size Planning Does Not Fit All

A prevailing myth about business continuity planning is that you can develop a plan for one company and then easily...
READ MORE > 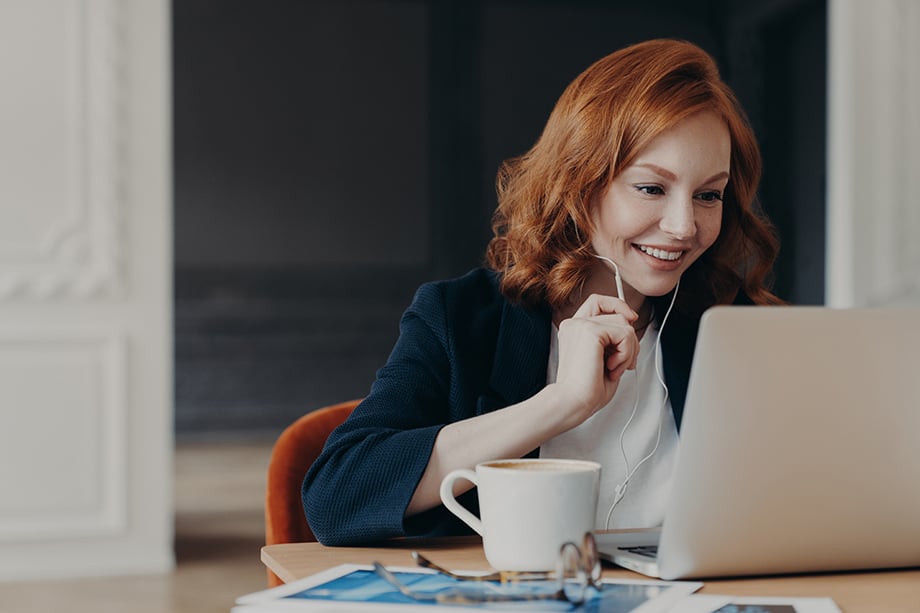 After more than 30 years in the business continuity industry, I’ve noticed that most newcomers are looking for practical instruction....
READ MORE > 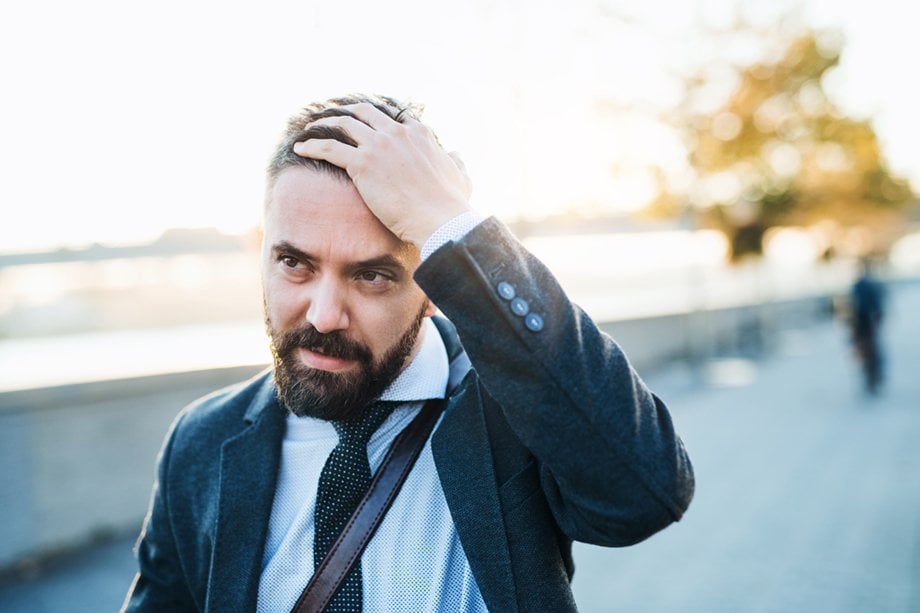 Before all of the year-end articles start coming in, we thought it would be a good time to reach out...
READ MORE >